The Eve Appeal wanted us to generate mass media coverage for the launch of ‘Ask Eve’ – a specialist nurse-led information service for women affected by or at risk of developing a gynaecological cancer. It’s the second most common cancer among women in the UK – and the world’s fourth biggest cancer killer.

We knew we had to go big and bold with our news release in order to highlight the danger women are putting themselves in by not talking about their symptoms. We created the right noises through research which showed that even though 71% of women have experience a symptom of gynaecological cancer, nearly a fifth would wait over a month before seeking advice about their symptoms.

ITV Lorraine covered the launch with an in-depth feature on the new service as well highlighting symptoms of the disease.  ON also landed 12 pieces of regional TV including BBC East Midlands and ITV Meridian along with 46 pieces of radio coverage – including interviews with LBC, BBC Radio Scotland and Heart Kent. 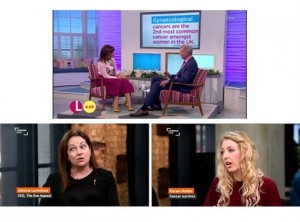